v0.3 Preview: Factions and the Map 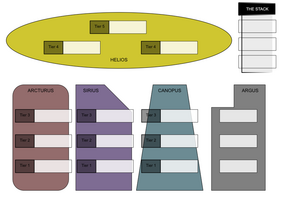 I wanted to do something a bit different for the Factions in hello, world.  Factions are very fluid in World. It’s a hyper-mobile digital environment ruled by accelerated waves of media-driven zeitgeist and a microscopically-small social attention-span. Districts and entire Servers get remade overnight, castles built in the image of the latest reigning Faction rise up and fall in a heartbeat, that sort of thing.

Helios is the domain of the Administrators, and those factions which have risen above the other four Servers for a temporary spot at the top of the lobster bucket. The Stack is a temporary holding area for derezzed Users and even entire Factions that have been taken out of the action and sent to a brief purgatory. More on the Stack later, but suffice to say that for the players it’s a sort of conflation of the mechanics for Trauma and Incarceration, while for the faction game it’s where a defeated adversary might bide their time before returning to trouble the players again…

Note that nothing is pre-placed! The table will collaborate to fill in starting factions in the player’s home server during Crew Creation, and the GM is then free to add other things that interest them or fill out the faction web in a pleasing way. But, that means that any faction might show up on the map at any Tier…?

Factions are slated to look something like:  ((see second image))

Note the entries describing their assets, staffing, ambitions, etc. at ascending Tiers 1, 3, and 5. The GM-prompting ideas for Faction Goal clocks also evolve to be more ambitious and build on previous successes. If the faction is on one of the intermediate Tiers (2 or 4), then the GM can interpolate, perhaps give them a Goal clock from the lower tier they’ve already succeeded at. The target is have every faction in Hello, World make sense at any Tier, in any Server. That way when the GM rolls on the Faction Turmoil table they can quickly erase and reposition factions around the map of World and know at a heartbeat what the shifting fortunes mean for their structure and operations.