Quite a lot! Aside from lots of little textual tweaks, here are the big things:

Navigation features in the PDF were soft-launched a while back, but they've been more consistently applied now.

The Book now has a 'Spreads' and a 'Pages' version!

Depending on what you prefer, you can now download the book in either Spreads or Pages... it's the exact same material, just different ways to look at it in the PDF viewer. Personally I like the way the book reads in Spread version, but you can achieve basically the same result from the "Pages" file by turning on 2-page view in Acrobat Reader or another PDF viewing program.

The Handouts have been split into Player and GM sections!

This change was mostly done to make the handout less overwhelming from a Player standpoint. The Player handouts have simple graphical rules explanations and feature the playbooks in a fairly good self-contained fashion now.  They are also now a free download on the itch page, which means you can direct a table of players to the game's itch page and they can grab the handouts free of charge for themselves (instead of the GM having to email everyone the Player Handouts pdf or whatever other workaround).

The Player Handouts have a whole new page where I managed to fit in explanations of the 9 functions and detailed descriptions of the Standard items list, both of which can be useful for player reference and to guide them into the unique nature of the setting.

The old crew creation rules were an ugly copy-paste out of an old version of the game's convention handout. The new ones have been rewritten from the ground up into their own full chapter! This chapter also now features updated rules for Cohorts, including reworked Edges and Flaws and all the little details of cohort harm and healing! 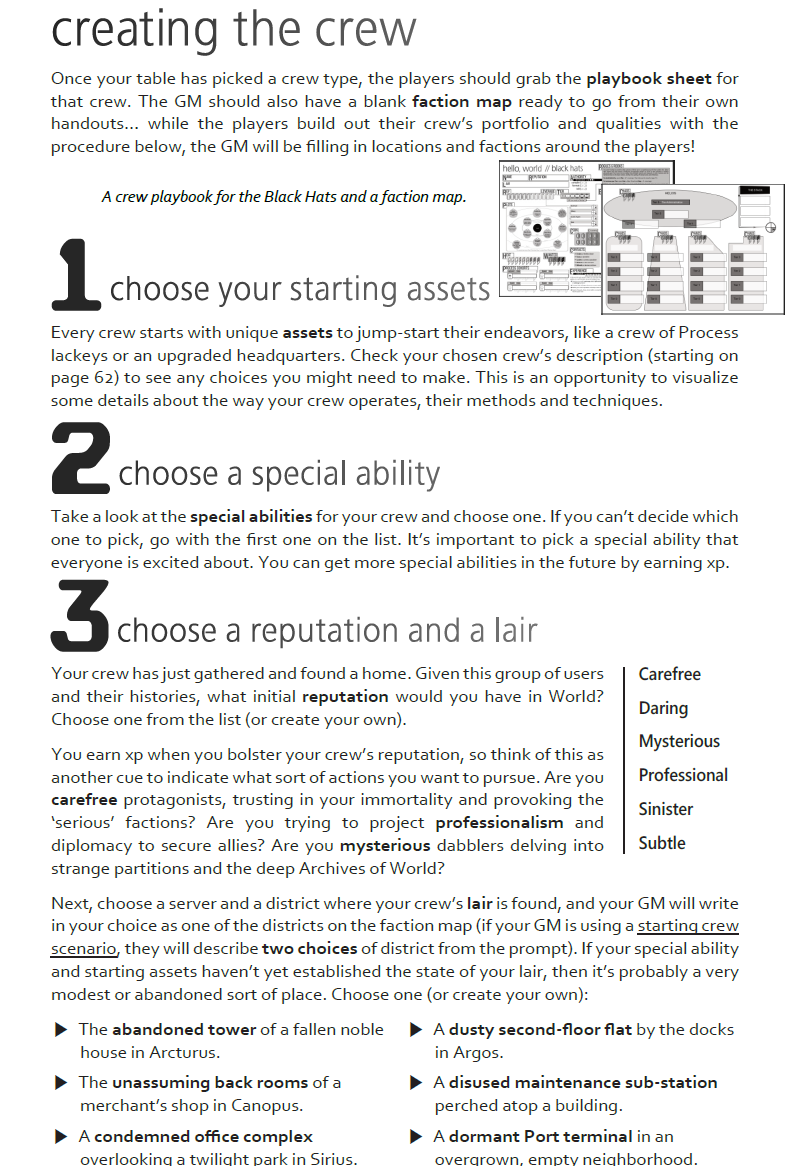 I can't help myself from tweaking playbooks, especially where they feel underwhelming in fulfilling their core 'promise'. This time the focus was on the Squawker, World's social playbook or 'face'.  The old special ability set did not feel like they gave this playbook enough interesting vectors of action (i.e. they didn't push a specific flavor for the playbook... they didn't strongly suggest something that your Squawker wants to actively do related to their identity).

Old specials were swapped out for newcomers "Center of Attention" and "Identity Crisis". These each suggest a different archetype of the playbook and grant bonuses for pursuing those situations: one seeks to avoid attention by using Mask to hide through disguises and social deception, and the other instead thrives in the spotlight because it means your user is a celebrity in World. Let me know what you think of them if you have a chance to play with them! 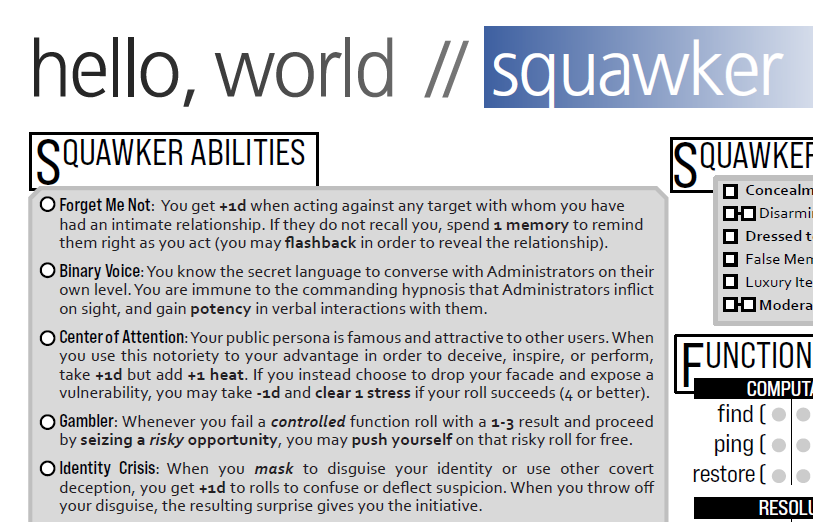 In the old version of World, we had replaced the concept of "Wanted level" with "Chaos level." The idea was to represent less of police attention on you, and more of a general idea that your actions were inadvertently destabilizing World and harming the systems. For various reasons this didn't work out how it should have: the flavor was a bit of a disconnect and it wasn't clear how your Crew gaining Heat would lead to Chaos rising... and moreover it was kind of a name change for it's own sake despite really being the same system at the end of the day.

For that reason this has been reverted back to the standard of Blades: crew sheets now show a "Wanted level" on them that, just like in Blades, increases by 1 whenever your crew fills up the Heat track. Additionally, the Resolution roll that your user performs when they return off the Stack has been updated with a much more detailed procedure that is much more flavorful for World. 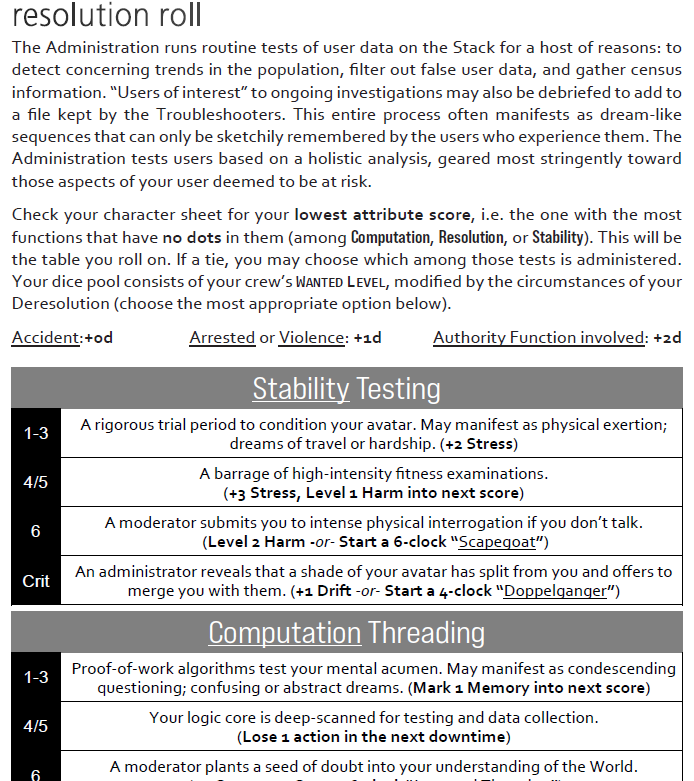 I still like the idea of Chaos level, but it deserves to be it's own system and it should actually tie back to the servers themselves. Below, you can see the updated Faction Tracking page now has individual Chaos tracked per location in your setting. For now, Chaos level has no explicit triggers which cause it to rise in a district: it should be up to the discretion of the GM when Chaos might increase... usually from a fairly obvious thing that happens in the campaign. Chaos in a target area is now one of the triggers that can add a modifier to a crew's engagement roll. For now that's the extent of the system (the GM can also of course make Fortune rolls using the Chaos level as the starting statistic or a major modifier), but it will be expanded a little bit in the future into it's own system cycle. 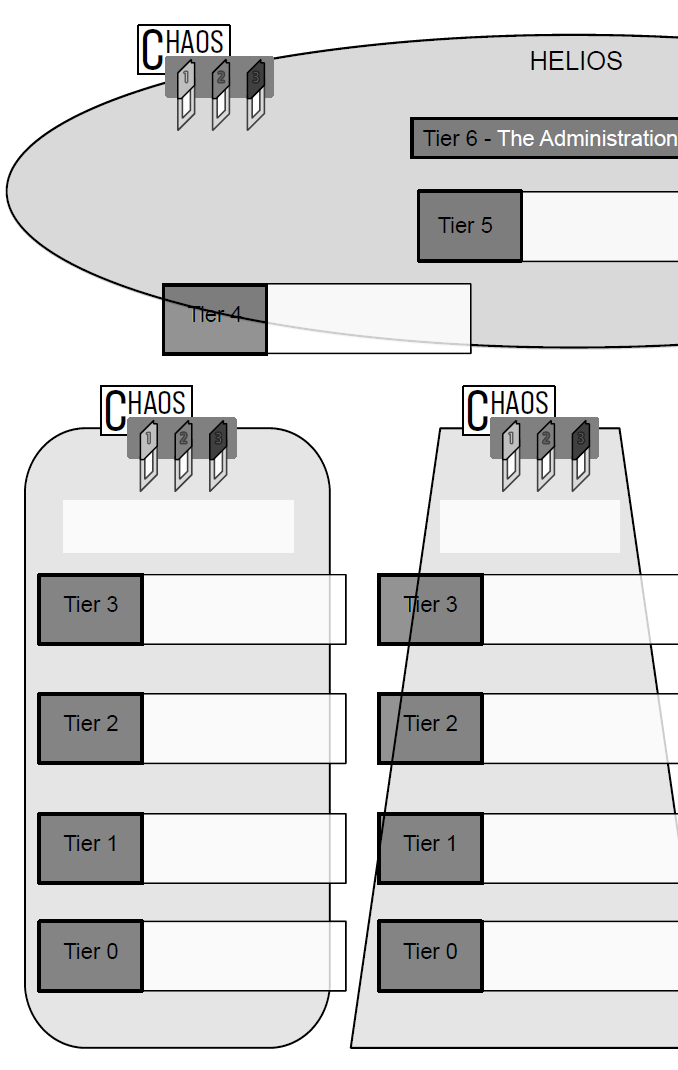 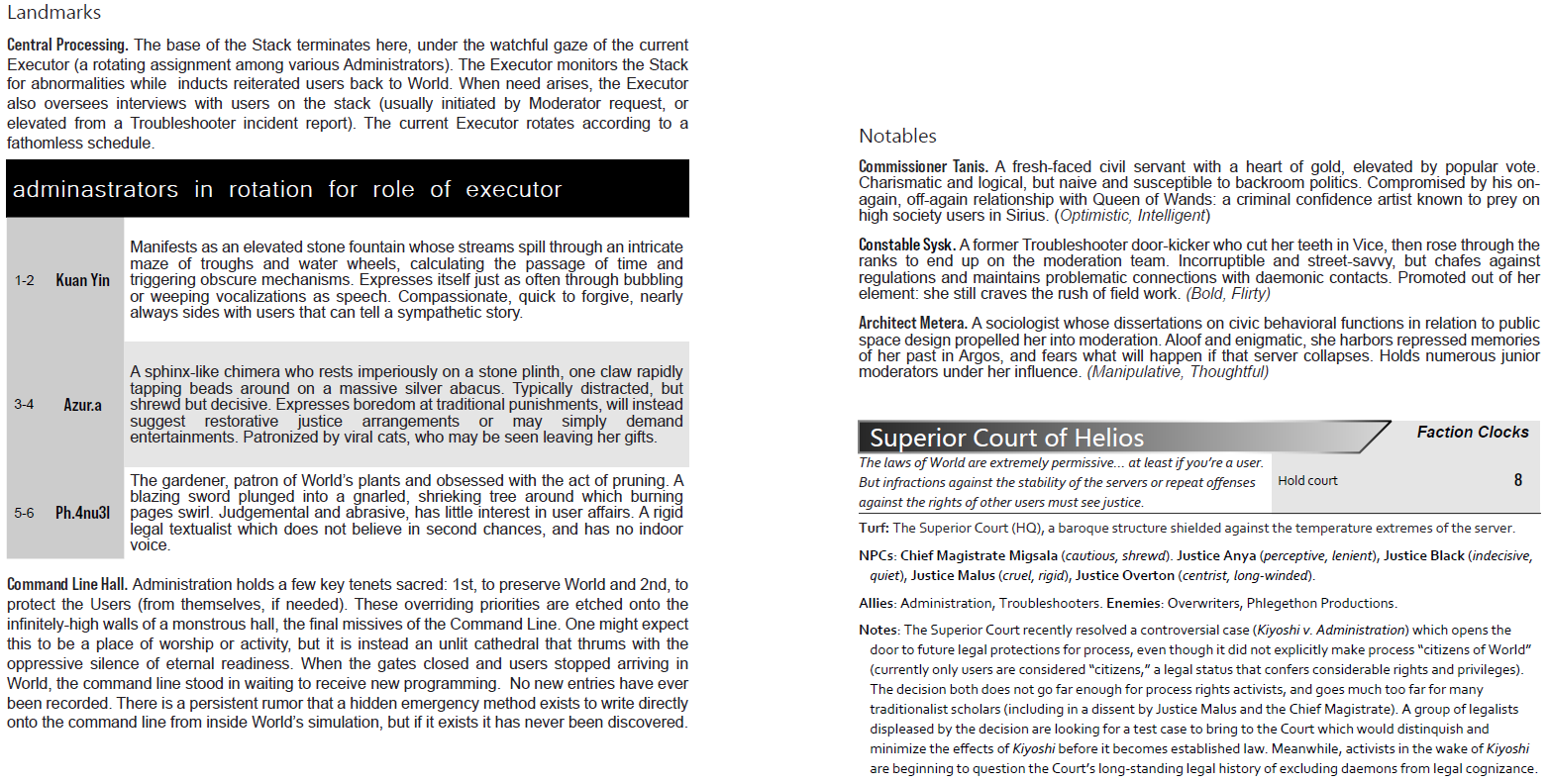 Members and systems of the Administration! 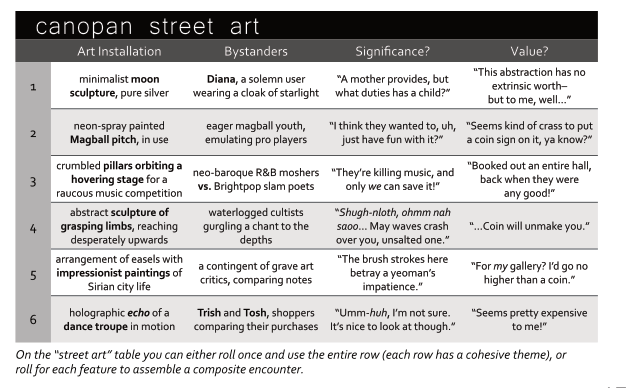 Four (4) new factions enter world, including the Avatar Sculptors and the Sky Painters! The third and fourth factions are mysterious interlopers who have inserted themselves into the Faction chapter unannounced... see if you can spot them hiding among the others! 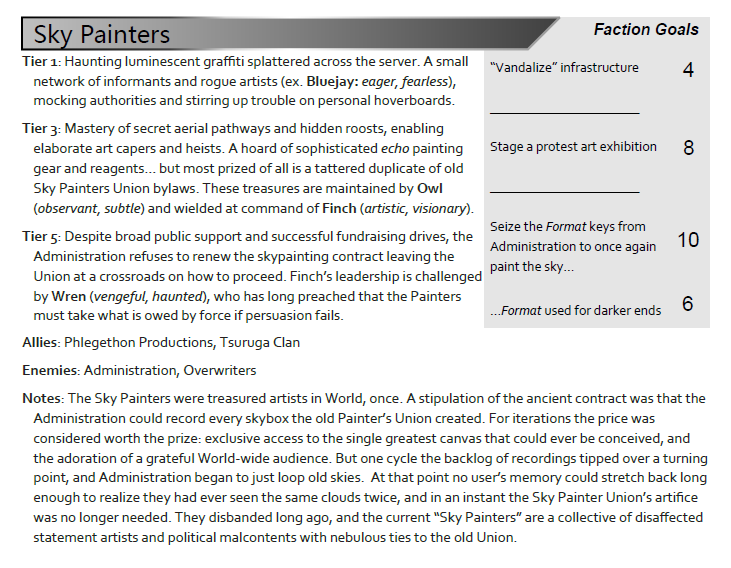 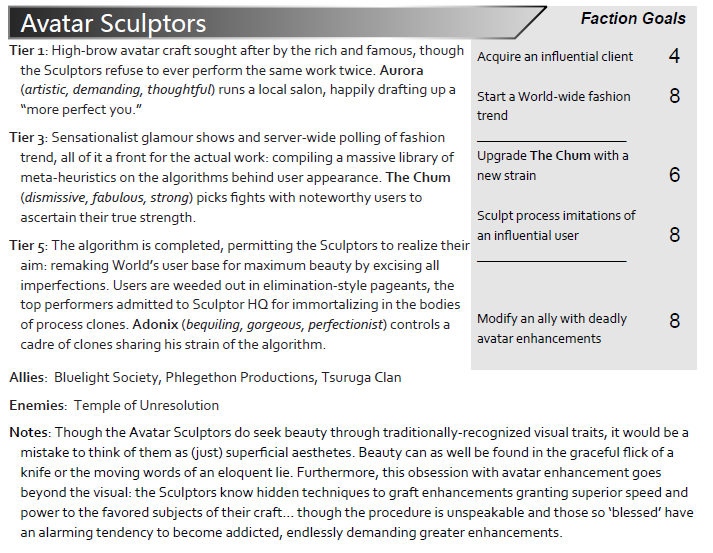 The Council is missing some material in the book, including a starting scenario (you should still be able to run them successfully using the GM handouts, including a full random table of story prompts / score ideas). In particular, I am looking to make the Council sample start scenario different to the first three: it will focus more on social/diplomatic conflict, and will have more open-ended prompts to factor in how many divergent ways that crew playbook can be interpreted and built.

The servers of Argos and Helios still need some maps and district descriptions to be finished. Argos will have 3 districts, Helios might end up with only 2.

Still need to write a downtime chapter! I specifically designed downtime in Hello, World so that you can run it completely off of the GM handouts alone without ever referencing the book (even as a Blades newbie, hopefully...), but detailed explanations of everything and examples of play are still useful to many people and so these will get added to the main book soon.

The new chapter on scores covers the engagement roll and some useful theory around score length and goals, which should be enough for many people already comfortable with the ideas... but it could use another couple of page spreads describing the teamwork actions in full detail and some ideas for more complicated scores. Teamwork actions are covered in a section in the player handouts, but if you want to read more on them you can also check out the page on them in the Blades SRD (they're the exact same in Hello, World): https://bladesinthedark.com/teamwork

A full example of play that describes an entire score and downtime cycle would be really cool! So would videos of the same thing. We'll look into doing that at some point.

A backlog of new community copies have been added for Hello, World, so if you've been lurking but unable to afford the game please feel free to take a community copy!

Adding to the questions about Pocket World. I backed that, never got anything from it, and can't justify buying another game, even if I love the premise, if I didn't get anything from the last time I paid...

Any plans to release Pocket World? The Kickstarter has been silent for a year but there are updates here?