The Breaker: Force and Hurt in World 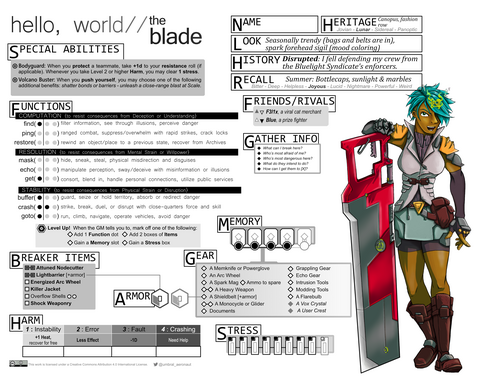 Above: one of Hello, World’s pregenerated character sheets using the Breaker playbook as it’s foundation.

Hello, World provides players a power fantasy, like a lot of tabletop role-playing games.  Being explicit with that is important in part because it's not always acknowledged within the thematic text of tabletop games that do it (and thus they inadvertently fail to match thematics in their stated thesis to the game as experienced, or as some would call it ludonarrative dissonance), but it's also important to talk about because the digital utopia of World is itself a power fantasy on it's own terms.

In regards to the first point, Blades in the Dark has a very interesting relationship with it's own fiction and themes: as a campaign begins the Players are spoken of often as ne'er-do-well scoundrels ("you start at Tier 0" and all that) but PCs are quite obviously heavily-enfranchised people via the systemic languages of the game.  Stress resistance and special abilities and the dice mechanics and teamwork (etc.) are all very empowering.   Even before I knew what the setting of HW was exactly like, I knew I would want it to more harmoniously map it's power 'feel' to the apparent reality of what the players can accomplish as starting PCs within the fiction.

That takes me to the simplest of tabletop power fantasies, that of being able to hurt stuff at will (and it's useful corollary: to do so while not being hurt in return... remember that as we'll talk about it again).  This thesis gave us the Cutter in Blades, but more classically the Fighter, or perhaps if you're a deep nostalgist "Fighting Man"; It has been with us since the very beginning, and it definitely has it's issues.  I should stress at this point that I don't believe that Hello, World is the game that will solve the underlying problems of physical violence as a principle vector of action in tabletop RPGs.  In truth, I LOVE a satisfyingly-done warrior class, so that's a strong piece of evidence against me.   My hope however is to at least shine a different lens, add a different note to the chorus, on the context and purpose of physical force as pertains to the worlds we create in our hobby.

Within this World physical force is actually somewhat depreciated compared to most fantasy realms.  Users are immortal (therefore, big-time adversaries made 'dead' do not stay that way for too long), and Process thugs or foot-soldiers are highly replaceable.  Because the people within World are permanent and the raw physical things in it fleeting, a warrior class could actually have a lot of problems feeling effective if it's solely centered on the principle of Hurting Things to be valuable at the table and within the fiction.

In response to that I realized that I wanted to center the warrior corollary, the Not-Being-Hurt part, as having equal strength in the design of my class.  The two starting Function dots for the playbook are Crash which strikes, breaks, or duels in close combat, but also Buffer which guards and deflects and controls physical territory.  This character is about breaking things certainly, but that's not actually super impressive in the fiction of World.  Not being able to be themselves hurt though, that could be the start of something.  They were a Breaker, in both the raw physical sense but also as in a circuit breaker, a protective element that absorbs harm for the vital circuitry around it.  The first 3 special abilities of the Breaker (in order as they appear on the character sheet) make the focus pretty clear, and there's even a fourth one after a brief break to take up a full half of the Special abilities that the playbook has written on it.

It's telling that the first 3 of these special abilities are nearly direct imports from Blades in the Dark's Cutter.   I change little about them in conception, and the changes in mechanical practice mostly just emphasize differing design intents in Harm Recovery and the way that Harm ends up on the character sheet to begin with (Players actually choose to take it as a substitute for Stress).  Blades  already knew something about this playbook before I figured it out: a Special Ability that merely lets you hurt stuff harder isn't actually very interesting.  More interesting is the world of consequences and ramifications that surround "Damage" in your fictional space.   How your player avatar (in World, an actual digital avatar) responds to hurting things around it or being hurt is a space that you can explore in a new way, I believe, through the Breaker playbook.

There's plenty more to dig into there but I now want to pivot to another common power-fantasy trope that this PC archetype tends to land in: Intimidation and coercion.  Hello, World does not have an action that lets you intimidate people (It still does have an action that lets you boss around subordinates in a different way, but that's a later topic).  If I'm trying to push back against certain assumptions about the nature of the Fighting Man archetype, surely just excising this problematic social interaction space surrounding it is a good start right?  And moreover, it shouldn't really be possible to intimidate bored immortals who lack any real pain responses, correct?

Ok that last piece is not totally true: you can still do it if you take this special ability from the Breaker.   I think there's something very powerful about taking this staple of "Tough Guy/Gal" characters and locking it behind a Special Abilities' permission space.  It says something about World that everyone has a natural pain tolerance and cannot generally be threatened meaningfully.  It, further, says something significant about your character when you take the Intimidator ability and just go do it anyway, gaining an entire line of social interactions ordinarily shut off to people in the setting.  I should note that Buffer, invoked here as the die roll function for the special ability, is the function related to absorbing damage, seizing or defending ground, redirecting attacks, heroically 'walking into the gunfire', and otherwise delaying or mitigating the ability of others to cause harm.  The duality is important to the playbook in a fictional sense, as a User in World with mastery over the sub-systems governing physical damage can turn that knowledge against others.

The Breaker is a playbook that is centered around absorbing harm away from the crew they run with, but when the need arises their name proves just as flexible as it's connotations.  It's partly an exploration of what hurt means in a space where the value of force is distorted.  And you know, it's also sometimes just about wielding a giant sword or energy glove and smashing apart the things that are in your way.  Sometimes that's what you want also.  At least I still like it!

Hello everyone who has joined us through the Humble Mable Bundle or the Whitney Delagio Bundle!  Hello to those of you who've been here from the beginning.  This is the first design diary of a series that targets the individual playbooks of the characters in HW, to be followed by discussion of the Crew playbooks and the nature of World.  Take a look through the design diary archives if you're looking for some more about the fundamental ideas that shaped the game!